The photograph at the top of this page shows the group in 2017.

Below are photographs from the first session of the youth academy back in 2012. Click on the photographs to enlarge them. 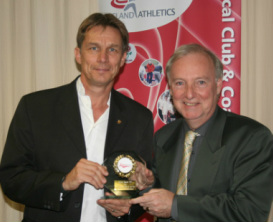 In December 2012 we were delighted to be named Run England's Eastern Area Group of the Year. The photo opposite shows Active Norfolk's Paul Evans and chair of Hethersett and the Meltons Sports Association Peter Steward with the award which was presented at Chelmsford City Football Club. 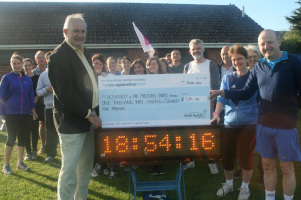 In May 2014 Hethersett and the meltons Sports Association were presented with a new digital clock thanks to a grant from South Norfolk Council. The presentation on the left shows Hethersett's District Councillor David Bills presenting the clock and a cheque to Shane Hull, treasurer of the sports association and chairman of Hethersett Olympic Legacy Committee ahead of the launch of a new running group which attracted over 40 runners to its first seassion.